In this blog I’m rambling about Indian cinema from my somewhat skewed point of view. Most Indian cinema bloggers seem to be walking encyclopedias of Bollywood or Hindi films, but since I started this “hobby” from an apparently unusual direction, with Telugu films, and have watched a lot more Tollywood and Kollywood than Bollywood, my posts also will probably be mainly about South Indian movies. However, along with watching the south movies, I’m also planning to fill the empty spots of my poor Bollywood knowledge little by little.

The posts do not necessarily follow any predefined format and I might write about anything that comes to mind if it’s somehow related to the subject – film diary entries, trailers of upcoming movies, soundtracks, t-shirts, DVDs, self-studying Telugu, and complaining about the quality and availability of subtitles. Some posts may be about my infrequent and equally unsatisfactory fan art projects that I’ve used to attend contests organized by the filmmakers. And sometimes if I stumble upon something random that is either very funny or otherwise remarkable, I might award the actors or movies in question with Mega Power Chit-Chat Awards!

The blog’s name of course refers to the South Indian habit of giving fancy titles to their movie stars – one of my favourites is Mega Power Star Ram Charan whose classic jumping stunt from Magadheera is also featured in the logo of the website. 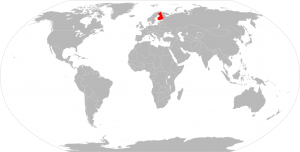 Not everyone seems to have an idea of the location of Finland, so I attach a map here.

Hello, my name is Mikko and I like movies. There probably isn’t anything very interesting to know about me. I’m just an ordinary 33 years old S. S. Rajamouli fanboy from Finland. However, it’s unfortunately not so ordinary to be an S. S. Rajamouli fan in Finland. Approximately no one over here knows anything about him or even about the Indian film industries in general. While there are some good friends that can tolerate my film enthusiasm to some extent, there are almost no one who would have enough interest to discuss about the latest gossips, exciting movie releases, and all the other things that are happening in Indian *ollywoods. The natural consequence was to use the Internet to satisfy my need of rambling about these things.

I got a kind of “addicted” to these movies after accidentally seeing a scene from a Telugu movie on YouTube sometime in 2010. It was perhaps the most over-the-top thing I had ever seen and so I had to do some research to find out what it was. It turned out to be the climax scene of the 2009 Telugu movie Magadheera and I naturally had to find the DVD and watch the film. While I loved the gravityless action scenes that YouTube had shown me, surprisingly also the story was very good and it quickly became one of my favourite movies ever. It just had everything, more than could be expected from a single movie: in addition to the stylish action, there were the crazy plot, hilarious comedy, 52 minutes long EPIC historical flashback, 400 years long love story, catchy songs, and some things that I’m not going to spoil here. After I recovered from the post-Magadheera amazement, I shortly found myself watching more and more Telugu films. There were many excellent ones but so far nothing has been as good as Magadheera. Even after seeing the movie dozens of times, it’s still a pleasure to watch it over and over again. I’ve also tried to spread the Tollywood awareness in Finland by watching it with around 40–50 friends over the last few years and their reaction has been generally extremely positive after the initial suspicion.

I blame this small piece of paper for so many things!

I expanded my field of interest also to Tamil cinema when Enthiran was screened at a film festival here in Helsinki, but I haven’t yet had the time to familiarize myself with all of the Tamil film stars to the same extent than the Telugu stars – most of the Tamil movies I’ve seen have been by Rajinikanth, Kamal Haasan, and Vikram. I’ve also seen some random films from the Malayalam and Kannada film industries and look forward to continue my research also on that front. I also should watch more Hindi films as it’s quite embarrassing to know so little about them. (Any movie recommendations will be considered!)

I’m also on Instagram and some of my posts over there (but not all of them) are about movies.

I’m listing the films I’ve seen at a website called Letterboxd. It’s a handy tool that I like to use to keep track of how many movies I’ve seen by certain actors (like Brahmanandam).

My other hobbies include computer programming and collecting and building things with Lego bricks, and sometimes I may combine the hobbies to create some silly movie-related stuff like games and Lego animations.

I also have a non-movie related website but I’m updating it even more randomly than this blog.