Megastar Project 1/152. (I really shouldn’t start this huge projects until I’ve finished the Superstar Project. But the Megastar Project is definitely going to happen someday so I can as well start right away.) 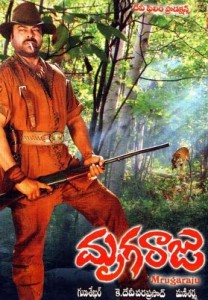 Mrugaraju is a 2001 Telugu film directed by Gunasekhar (who is also known from Varudu and Rudhramadevi) and starring Megastar Chiranjeevi as “tribal tiger,” the lion hunter Raju. The film is set in some kind of interesting hybrid of Africa and India. It is apparently based on an American adventure film The Ghost and the Darkness (1996) that is based on a true story about lion attacks in Kenya during the construction work of a railway bridge over the Tsavo River in 1898.

Simran plays the heroine, engineer Aishwarya who tries to finish the construction of a railway bridge which is located close to Raju’s tribe. The supporting cast includes Chiranjeevi’s brother Nagendra Babu and Prakash Raj who plays the tribal leader and Raju’s father. Brahmanandam and M. S. Narayana are in small and somewhat unnecessary comedy roles.

The story is simple: A lion is frequently killing bridge construction workers and Raju from a local tribe is needed to hunt it down. In the first half, there are also evil forest officers but they don’t have that much to do with the main story as they are defeated as early as in the interval fight scene (Chiranjeevi’s boomerang blade is also worth mentioning), and the real antagonist is the lion. The storytelling follows the usual format that there is a dramatic revelation just before the intermission which is then explained in a long flashback in the second half. The rest of the story is all about killing the lion and clarifying the misunderstandings that happened in the flashback.

Mani Sharma’s songs are mostly average and unmemorable with the exception of the chai song in which Raju explains the pleasures of tea drinking to Aishwarya’s bridegroom.

The film’s background music also has a recurring melody that I think is totally copied from the castle defense fanfare of the 1999 video game Heroes of Might and Magic III.

There are some stupid moments, for example in the falling-from-the-bridge scene, and the lion scenes aren’t very convincing either, but overall the movie is surprisingly entertaining and definitely worth watching!

The movie with English subtitles has been uploaded to YouTube by iDream Movies.